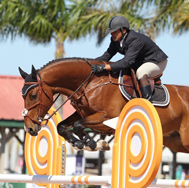 A year was spent working for Paul Freimüller in Switzerland, who was a member at the Swiss team competing successfully at the European Championship. He placed third in the Hamburger Derby and rode double clear in the Nation Cup in Aachen. Riad rode at Freimüller's the younger and older horses, showing to international jumping classes and placed at the CSI** in Austria/Weer.

Riad rode for Armin Uebelhard in Switzerland, trained by Pius Schwizer, member of the present Swiss team, competing at European, World Championships and the Olympic Games. Riad trained and competed at Uebelhard's the younger and older horses.

From there Riad went to the U.S. and worked for Highlife Farms in Orlando as hunter/jumper head trainer. He took over their breeding stallion Prezioso S which he showed up to 1.50 meter classes successfully. Prezioso S went on later to Lauren Hough and showed all his potential by winning some big international classes in Europe with her.