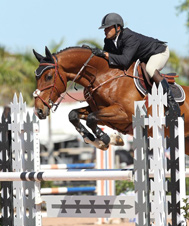 Riad Landoulsi was born September 27, 1975 in Berlin Germany. His equestrian education includes three years of training with Dolf Dietram Keller who is a famous rider in Germany, well-known for his dressage and jumping skills up to Grand Prix level. He is one of a few riders in Germany holding the title of Reitmeister.

Afterwards Riad rode with Tjark Nagel, who rode many Nation Cups for Germany and was member of the Olympic team in Barcelona, won and placed in international Grand Prix jumping classes. Riad also rode with his son Bjoern Nagel, who was competing in the past years for the Ukraine at World Championships and the Olympic Games.

Riad spent ten months in the German Army, still riding and showing younger and older horses. The time after he stayed with Karsten Huck, a Nations Cup rider who rode the Olympic Games in Seoul, won with the team, received third place in individual, placed and won many international jumping classes and also maintains the title of Reitmeister.

His next stop was at Marcus Ehning's, Marcus was the leader from the world ranking list, World Cup winner, won the Grand Prix in Aachen, the European Championship with the team. He scored third place in the World Championship with the team, rode the Olympic Games, and has been the winner in many international jumping events. Riad rode there younger and older horses and competed these horses.